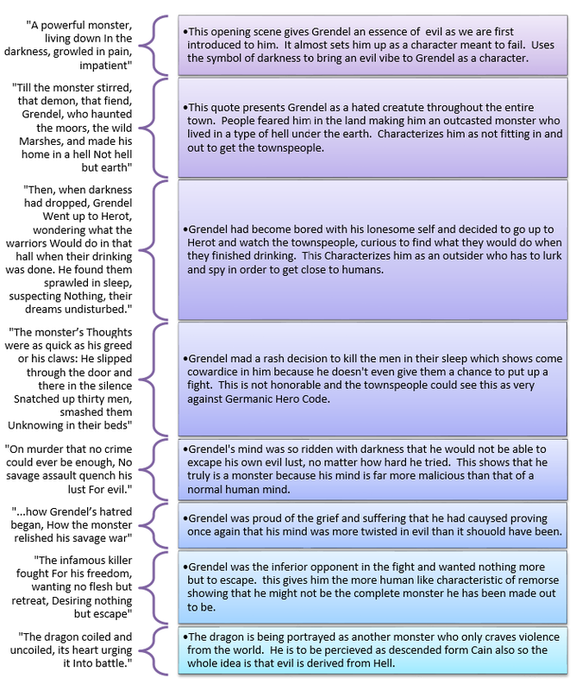 ﻿﻿The author uses many repeated references to Cain and Hell when describing the villainous characters.  Many times this is used to relate them as a contrast to God and the Christian beliefs of the townspeople characters. ﻿ This could be done in order to make the audience thing negatively of the monsters right from the beginning and never give them a chance to show any human characteristics.  The monsters are generally mentioned primarily in the battle scenes because according to the townspeople, the monsters are unable of having real feelings and only care about violence.  Darkness is a commonly repeated symbol throughout the story when mentioning darkness because it is universally referenced with evil.  The setting of Grendel’s home (underground and in a cavernous, dark area) ties all of the darkness and evil connotations back to the human-eating monster.


In the book Grendel, we definitely see the “Beowulf Villains” through a different perspective.  Grendel could have been harmless to the humans had they accepted him into their society but when he was rejected he lashed out against them.  The dragon stays evil from this perspective too and we see how the dragon might even be the evil influence pushing Grendel towards his violence against the townspeople ﻿
﻿